Early in 2021 when Blueprint were first approached to create a launch event for what was then known as the Lotus Type 131, the brief was simple.

Create an event for 200 VIPs and journalists, which in the case of severe Covid restrictions, could be streamed online.

At Blueprint, we strive hard to ensure that we always listen to and answer what is being asked of the brief, so it was perhaps a bit of a surprise to the client when we said - “no”. 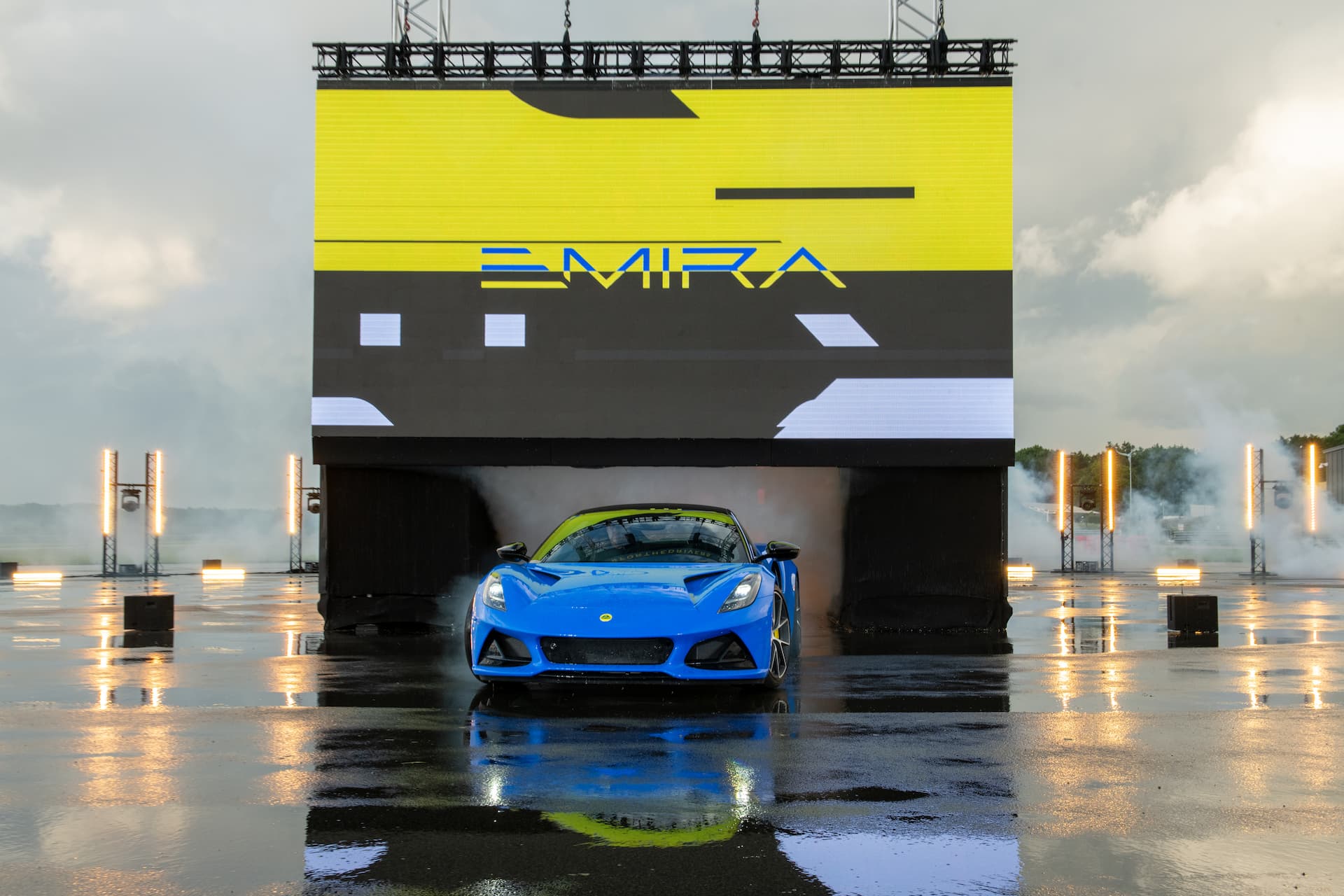 Regardless of what the future Covid restrictions might be, our position was firmly that launch events today should be about content. About creating, generating and spreading content, which regardless of whether or not a physical audience can be present, should be designed to be viewed, shared and create discussion on line.

We’re fortunate that our clients at Lotus were willing to trust us, and so “Emira Unboxed” was born. A live one hour broadcast, from Hethel, the home of Lotus Cars.

Skip forward eight weeks and the Blueprint team of 70+ technicians, producers, editors and riggers started to descend onto the race track at Hethel. Construction immediately began on the key element of the unboxing a 147 cubic meter structure, wrapped in LED and with a front wall that lifted into the air. 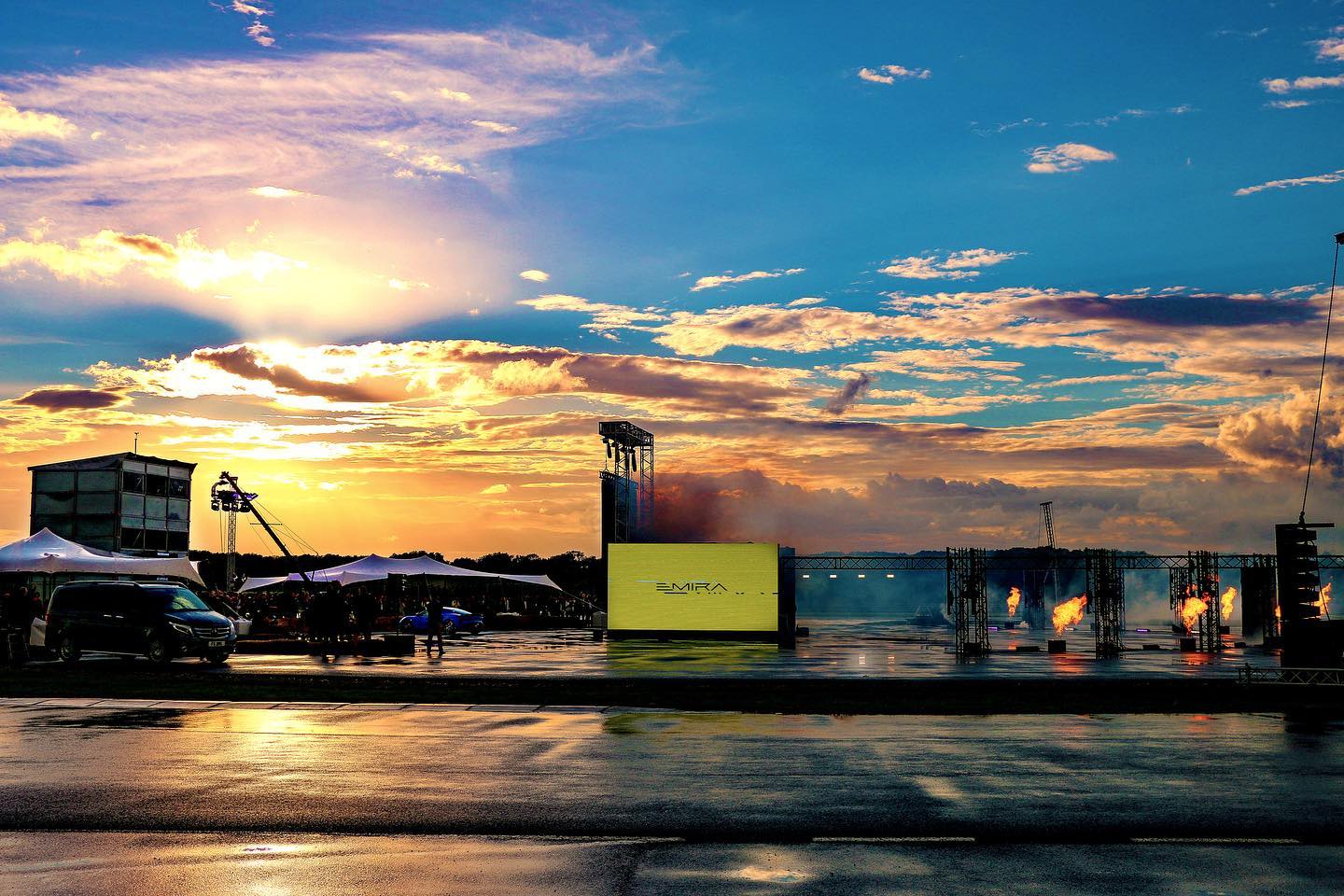 In addition to the physical structure, multiple pieces of video content with the cars and the stars (in this case Lotus employees) were filmed and edited on site. Five separate camera crews, including drones, cranes and camera cars filmed both around the site and in a custom built studio to capture the Emira looking it’s absolute best. 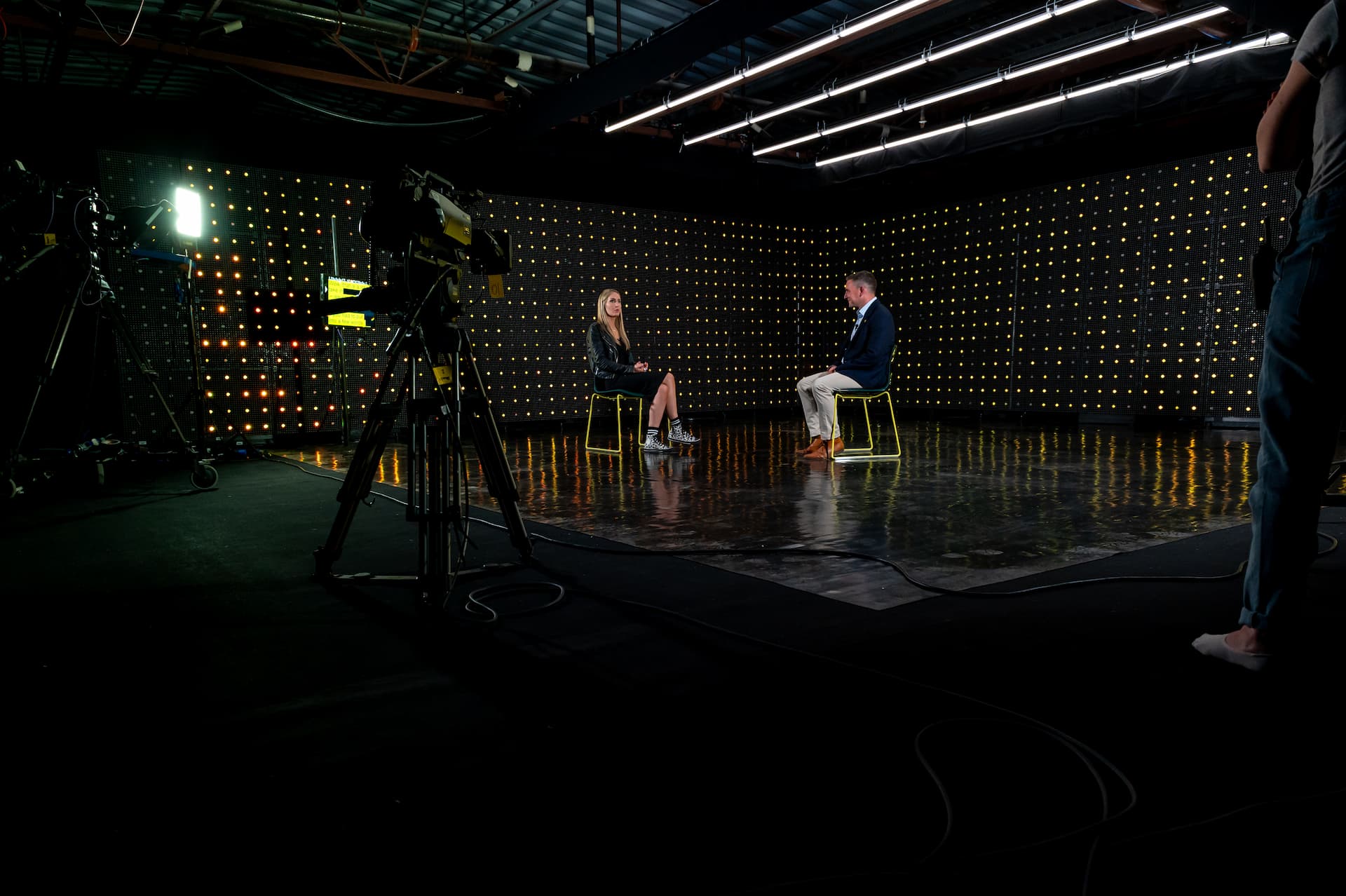 With 3 days to go, the outside broadcast trucks rolled in and several miles of fibre, camera and power cable were run to every corner of the track and factory. 12 separate cameras, some cabled, some connected by RF signal were piped through to a central control area for monitoring and direction. 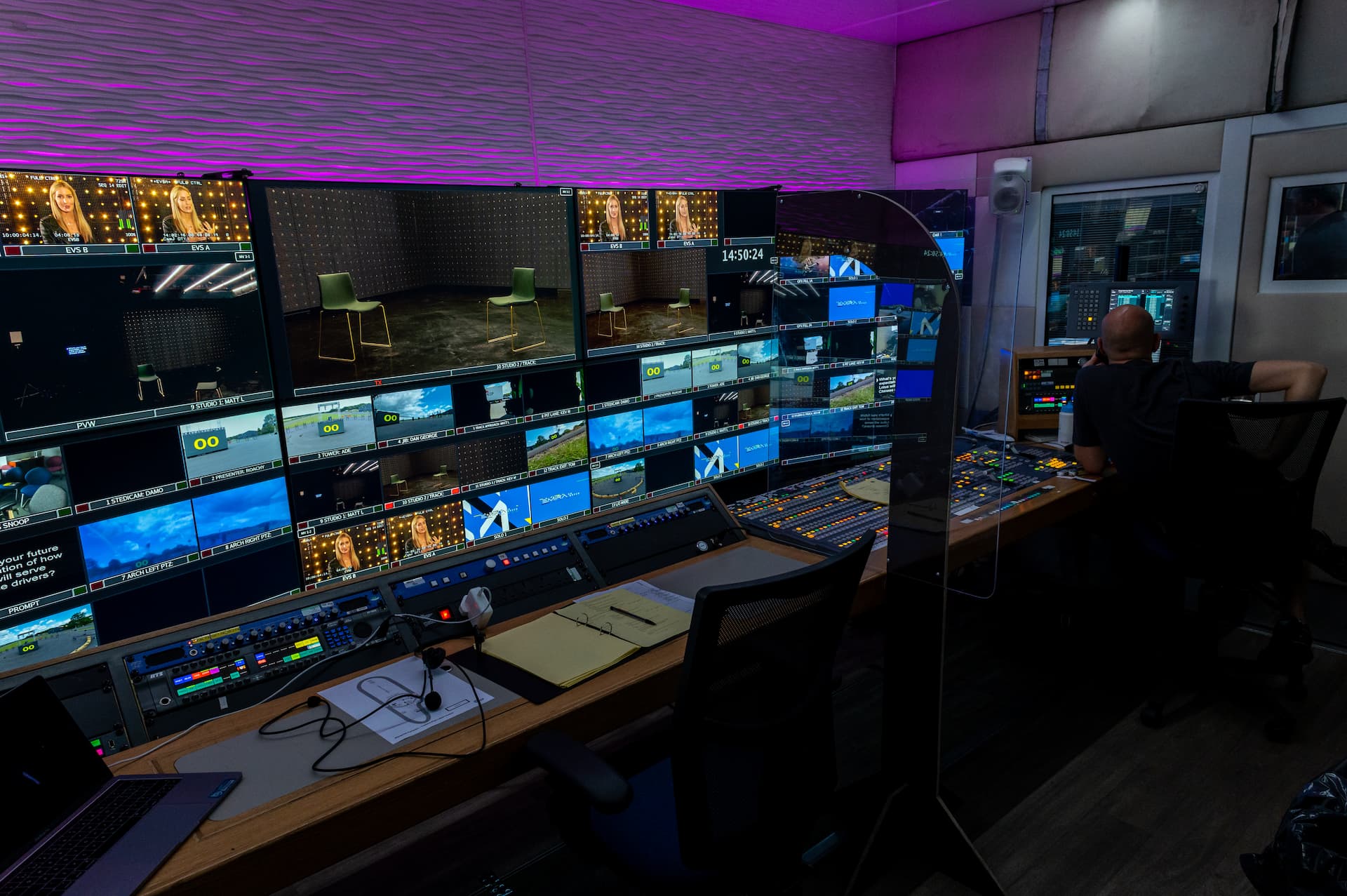 Our brave, and it turns out weather proof presenters, Andy Jaye and Helen Stanley, alongside Formula 1 World Champion Jenson Button brought the glamour, expertise and automotive knowledge to the show. While 131 Lotus superfans were recruited to be a virtual audience and provide instant feedback on the Emira from their homes around the world. 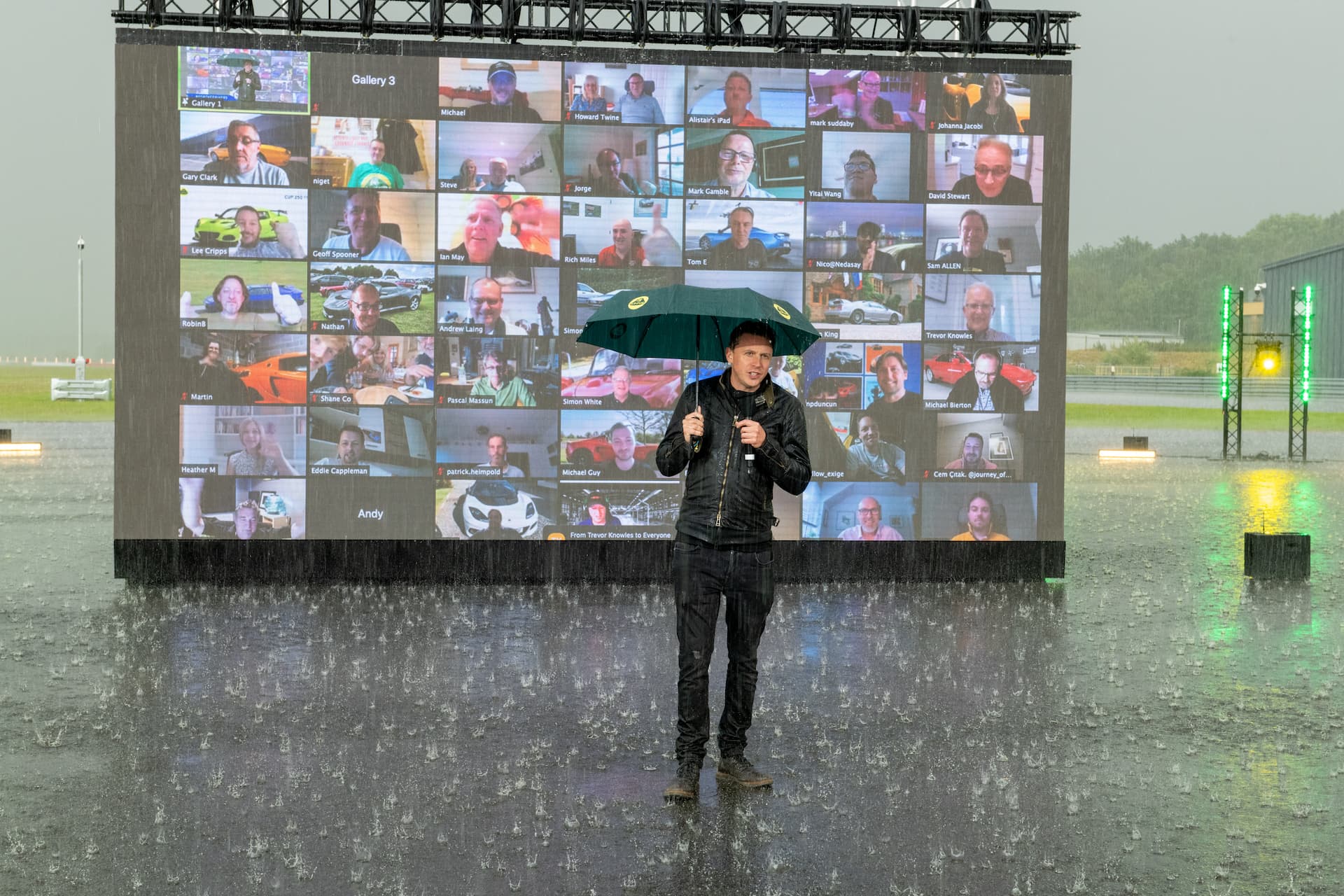 With showtime fast approaching, the only element the producers couldn’t control was the Great British Weather. And while live on-air, the weather proceeded to provide a constantly changing and challenging companion. Despite this the show went on, and after the car ballet of historic Lotus cars, the time was right to unbox the Emira for the world.

At the stroke of 8pm, the Emira barrelled out of the pit lane and started it’s course around the track. With lights, pyrotechnics, flags, music and plenty of close ups, the first of the the two Emira’s put on an impressive track display.

As it pulled into the skid pan, the LED box we’d been trailing so much came to life, lifting into the air. The strobe lighting, smoke and music building to a climax as the show Emira emerged for the world to see for the very first time.

Reaction to the broadcast online was spectacular, with viewing numbers on the night in the hundreds of thousands, visits to the configurator immediately after the show exceeding annual production and positive sentiment across the board.

For Blueprint, the content journey didn’t stop there, with highlights packages and unique content created for China, Japan and billboards in the UK and USA - bringing the key unboxing moment to life for global Lotus fans.

Our thanks to all of the creatives, technicians, producers and clients who pulled together to allow us to create this brand defining moment for Lotus Cars. It truly was an experience #forthedrivers.

Are you seeking to engage your audience with a showstopping event or experience? Perhaps trying to...